Turbos, turbos and more turbos are what you missed if you did not attend the second annual TMIOA Rally held June 18-20, 1993 in Harrisonburg, VA. Sixteen Turbos, six non-turbos, one chase car and twenty-two turbo enthusiasts combined for a memorable two days of riding in the scenic Shenandoah Valley. 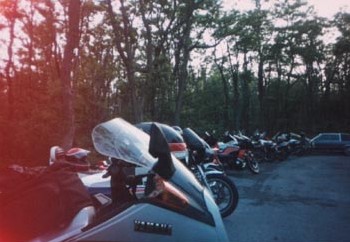 The first morning we met on the Skyline Drive at Big Meadows Lodge for an early, no sausage gravy and biscuits, breakfast. This was followed by our own police escort along the Skyline Drive with "Fast" Freddie Spigle doing less than the speed limit just to p.o. Virginia's finest.

A loosely knit string of riders was then pulled through the mountains by our fearless leader on his pristine CX650T with the CBX saddlebags. Except for the front runners, the pace was leisurely and afforded plenty of opportunity to enjoy the view along the specially selected roads. 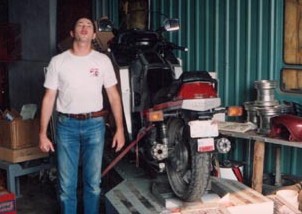 A late afternoon dyno run afforded itself at Shenk Honda in Harrisonburg. (Thats TMIOA prez Rob Miller preparing to run his Seca Turbo on the Shenk dyno, ed.). A CX650T (80hp), an XJ650LJ (70 Hp), and a ZX750E1 (94 Hp) were tested. The graphs and charts were interesting, but only proved that horsepower isn't everything.

That evening we enjoyed a picnic atop Loft Mountain hosted by beautiful Marilyn Monroe -- er --Lough and had our fill of barbecue chicken, baked potato, iced tea, lemonade, salad, cake, and -- well, you get the idea. Afterwards, turbo talk was heard into the wee hours of the morning outside the official, overflowing with Turbos, Rally Headquarters, the Misty Mountain Motel.

The following morning we were joined by Glen Edwards who rode his immaculate ZX750E1 from Michigan. We had breakfast at White's Way, a converted 1920s style gas station. The menus were written on 25 pound flour sacks which was equal to the meal they served. Everyone anticipated the day's highlight, a steam locomotive ride up Cass Mountain in West Virginia.

Unfortunately, near Montery Virginia, the road bit one of our riders due to boiled brake fluid. The injuries required a chase car ride to the doctor for treatment of an abraded hand and arm, and bruised pride. The rest of us rode the former logging railway to the cool West Virginia highlands where a particular ZX750E1 rider was heard to say, "That Allen, he's got us in the damned boonies again!"

For the ride back to rally headquarters each rider selected their own pace and we rode in scattered groups. The front runners were treated to a "display of excessive speed" by a Thunderbird Super Coupe through a tight mountain pass and a refreshing rainstorm as they neared Harrisonburg. 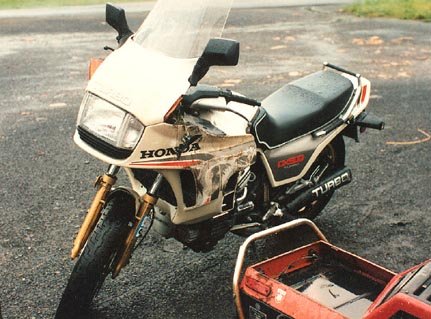 Over the next few hours arrangements were made for that evening's pizza bash, complete with Turbo Dog high octane beer air freighted in from New Orleans.. Turbos filtered in from the days ride including a CX650T rider from Kentucky who was on the Skyline Drive and happened to hear of the rally. After counting heads, worried thoughts were confirmed as the phone rang. A CX500T and a deer had conducted a roadside meeting. The deer hunter was taken to the nearest hospital and treated for a broken collarbone plus other less serious injuries.

The party mood was somewhat dampened, but countered by the first Turbo Rally Awards Ceremony mc'eed by that famous, when he doesn't have a failed stator, peg scratcher, Mr. Allen Lough.

The evening's festivities were concluded around midnight and followed by an all night run to rescue a damaged deer killing projectile (CX500T) from the backwoods of the Virginia-West Virginia border.

The following morning, well actually, later the same day, a ZX750Eq and a Yamaha Turbo rider left separately for the HSTAR rally in Helen, GA. The Loughs were unable to attend as they were seeing to the hospitalized rider that was due to be released that day.

As everyone reviewed the events of the past two days, It was obvious that friends when you need them are plentiful among the TMIOA, I thought of this Rally and looked forward to Turbo Rally III. I knew it would be difficult to wait until the next opportunity to meet more Turbo enthusiasts and ride in the "boonies" again.