It all started with a phone call on the Thursday evening before my planned Friday departure to Valley Rally III. It was Steve Klose from Englewood, New Jersey, calling to inquire if I would care to ride to Elkton, Virginia, location of rally headquarters, the Misty Mountain Motel with he and a friend. 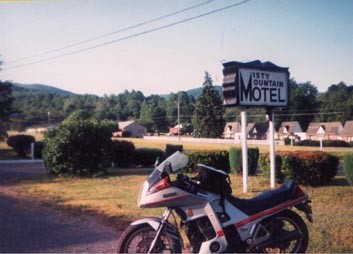 Steve explained he was departing his home Friday morning and could meet me that day at noon near my home in West Chester, Pennsylvania. I didn't have any problem with that and I knew some nice backroads through Maryland horse country I wouldn't mind sharing.

Friday dawned bright and clear, with a bit of a chill in the air. Steve's friend Ray Espinosa was riding a CB750 Nighthawk with a sweet sounding Supertrapp pipe and Steve was on his beautiful 40,000+ mile Kawasaki 750 Turbo. I was aboard my 60,000+ mile Yamaha Seca 650 Turbo.

We motored leisurely southward through Fredrick Maryland and Charles Towne, West Virginia with the final leg on US 340 South bringing us into Elkton at about 6 pm. We fueled the bikes and rode the three miles out of town to the motel.

There we were greeted by early arrivals Paul Brown from Maryland (CX650T), Kent Flannery from Kentucky (CX650T), Brad "deerslayer" Gay from Norfolk, VA (CX500T), Jerry and Charlotte Settle R100 Turbo and R65, respectively) from Middle Tennessee on their BMW's, and of course, our fearless leader Allen Lough (CX500T). 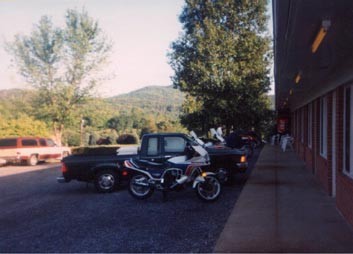 We exchanged greetings and salutations then proceeded to "bs" the night away. Allen dispensed route sheets and maps and discussed the next day of riding to Davis, WV. Late arrivals included Bob Forbes (Kawasaki 750 Turbo) and a friend riding a Gold Wing from Philadelphia.

It had been cool the previous evening, but no one expected solid ice on the bikes in the morning. It set a new record (28 F) in Elkton and we were three miles closer to the mountains than that. Batteries churned engines slowly or not at all that first morning.

After a country breakfast we reveled in the quiet VA-WV countryside along routes 33, 220, 42 and 93. At the Davis Inn lunch stop we were greeted by the owner and mayor, Ladd Jasper. His hospitality and conversation ensured a grand welcome for any motorcyclist that ventured through his town.

After lunch we toured Blackwater State Park and took some time to see the falls on our way through Canaan Valley, Seneca Rocks and Spruce Knob. We arrived in Elkton 220 miles later and took our Cuzz" barbecue atop Loft Mountain on the Skyline Drive to view the emerging stars of the Blue Ridge Mountains.

The mountain roads took their toll and resulted in some weary riders Sunday morning. Some wanted to view the local environs and others wanted to tour at a more leisurely pace. This resulted in a personal escort for me along the Highland Scenic Highway of WV, by none other than Allen himself.

We rendezvoused with the rest of the group that evening at the Misty Mountain and devoured a few pizzas before the night air and early departures forced all to retire.

It was another two day spectacular hosted by "Mr. Turbo" Lough. No mishaps, no problems, no complaints. Only hundreds of miles of deserted mountain roads beckoning you and your motorcycle. Can't you here the calling you right now?